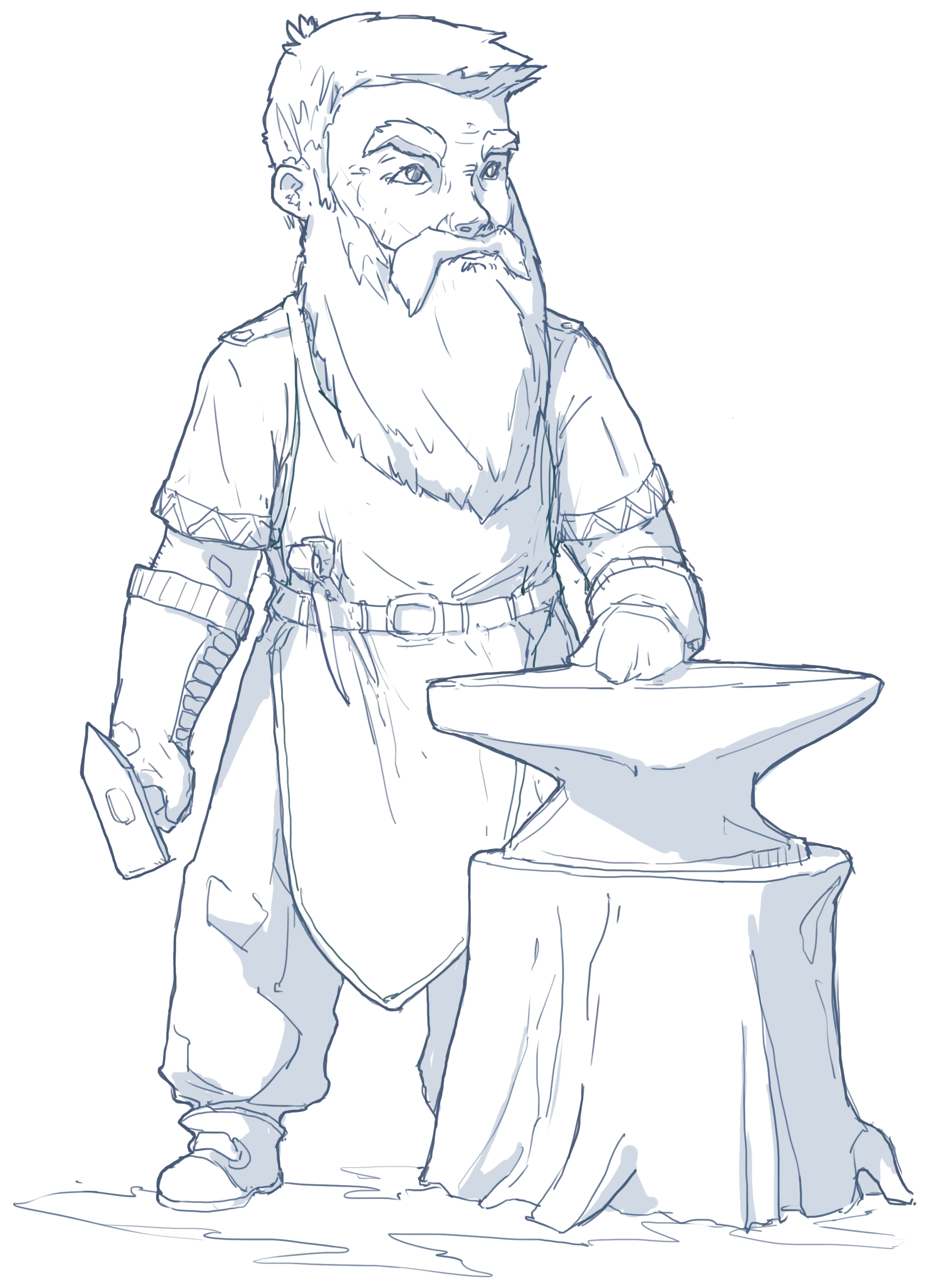 All dwarves regardless of their planar origins, share two distinctive traits aside from the obvious physical ones. One is the Rubric, a catalogue of genetic memory that holds the limits of their knowledge and growth. The other is the sort of groupthink hivemind that all species of the Three Pillars share.
Even free dwarves still have much of their old trappings. When large numbers of them are together, they have an exponential effect on one another which induces a sort of automatic order to their lives and behaviors. Dwarves that venture out beyond the holds and adventure with non-dwarves however find that they slowly lose this innate sense of place and purpose. Many find the experience highly disturbing and return quickly. Some rare few though, find fresh relief and joy in this and find a place among other civilizations.
Dwarves are treated as adults from the moment of birth, start showing signs of middle age around 200 years old, and old age around 300. Dwarves can die of old age around 300-350, but oddly enough there’s a wide variance in just how long a dwarf can stretch out their old age. The oldest dwarves are upwards of 700 years old, but this is rare. After they’re 300 years old, dwarf characters have an annual 5% chance to die of old age, or 1% if they have an unfinished ambition they’re working towards that they started before they turned 300.
Dwarves stand around three and a half to four feet tall, and while they’re proportioned a little thicker than most, it doesn’t come close to accounting for their highly unusual weight of five to seven hundred pounds. Male and female dwarves have roughly the same height and build.

Dwarves are born more or less fully formed, hairy and able to speak and walk by virtue of genetic memory. This genetic memory is referred to as the Rubric and it is both their greatest strength and weakness. It includes knowledge of architecture, masonry, blacksmithing, carpentry, etc.; it is a massive but finite store of blueprints and crafting dogma inherited from the vast genetic history behind them.
At birth a dwarf will only have access to speech and basic day-to-day needs, but they quickly uncover more as they encounter crafts and are reminded of their ancient subconscious. Most dwarves will spend their first year or five drifting from task to task in the hold before finding their obsession, the branch of the Rubric which is accessible to them. They are then usually quite content to spend the rest of their life relentlessly pursuing this craft all waking hours. Where this becomes a weakness is that as massive as the Rubric is, it represents the whole of what a dwarf can learn… original inventions are almost unheard of.
Some dwarves however, known as “Betanrerith”, never find their obsession and are generally asked to leave their hold; not out of malice or bad feelings, quite the opposite. These rare souls leave their holds, see the world, break out of their paradigm, have original thoughts, and create new things. It is only through such folk that the rubric can be expanded.

Romgar are dwarves from the Prime Material, and they are odd folk. Hairy, thick-skinned, asexual, and zealously industrious, they are the workforce of dragons. Up until recently, dragons reigned supreme over the mountains that line the coast of The Bay. Ageless and with no need for reproduction, the eggs they laid hatched the perfect workers, dwarves. They built massive holds to house their queens, amassing awe-inspiring hordes of treasure to sate the serpents’ pride and greed.
But about 250 years ago a mysterious figure rose among them, a dwarf who wasn’t bound to the hivemind… the first Betanrerith among the dwarves of the Prime Material. A messianic cult formed around this dwarf named Noth and eventually they were able to liberate a hold from the grasp of their queen. She is now imprisoned deep below ground where her eggs are harvested for more dwarves, her flames used to power the hold. Not long after the first hold’s liberation, other holds broke their bonds as Noth roamed the mountains. These days, many holds are free but many are still held in bondage… no one knows if their messiah is still out there freeing dwarves, but stories of a sighting or encounter with the legend surface regularly.
Religion among the dwarves is a divisive topic at present. Many, if not most, still worship the many thousands of draconic deities that have their places in their Rubric. From absurdly minor deities to the all-powerful and all-knowing, dwarves have gods for every possible occasion and aspect of life. That said, worship of Noth is not rare even though opinions on the alleged messiah are mixed outside of the cult. A not-insignificant number of free dwarves find their own newfound freedom and individuality an affront to their gods and seek to repent and atone.
All Romgar are quite hairy and while some grow their beards long enough to reach their waists, most with physically active professions keep it trimmed to chest height. Many will assume that all Romgar are male due to the whole beard thing, but due to their lifecycle, they do not have reproductive organs.

All dwarves start with the following features:

Dwarf Traits
Aging. Though they are often treated as adults by their own people shortly after birth, they mature by 15, reach middle age by 70, old age by 150, and are venerable by 350 years old. After becoming venerable, dwarves have an annual 1% chance of dying unless they have an unfinished grand ambition they formed before they became venerable that they have been working on for 16 hours every day. After the age of 500, even if they still haven’t finished that ambition, they have a 1% chance of dying every year.
Resilience. Your Grit and Will increase by 2.
Size. Your size is Small, but your carrying capacity is calculated as though you were two size categories larger.
Speed. Your base walking speed is 20 feet and is not adversely affected by encumbrance.
Darkvision. You can see in total nonmagical darkness as though it were brightly lit, though you cannot discern color, only shades of metallic silver.
Density. You sink like a rock in water and therefore are incapable of swimming (though you can walk at half speed on the bottom of a body of water if it is solid) when gravity is present.
Planar Origin. Though not necessarily where you were born or grew up, different planes of existence have different kinds of dwarves. Choose one of the following origins:

ROMGAR — THE PRIME MATERIAL
The foundations of the Prime may be shattered, but…
Craftcunning. You gain competency with two craft skills of your choice and History checks related to crafts you’re competent in.
Survivor. Your Grit or Will increases by 1 every time you purchase an advancement with experience.
Languages. You are competent in Draconic.

EINHERJAR — THE CELESTIAL PLAGA
The fires of this once shining paradise now unlit, your people…
Dark Dreams. Once per six hours of sleep, in your dreams you may seek out a mysterious celestial ancestor who will answer a question about the results of any course of action you plan to take in the next week. The answers they provide are limited to some approximation of “good”, “bad”, neither, or both (the exact phrasing/communication may be an easily understood symbol or phrase). There is a 50% chance (rolled in secret) your referee will provide you with the “bad” result regardless of the actual likely outcome.
In Darkest Night. This replaces the effects of your Darkvision trait. You can see in total darkness (magical or otherwise) as though it were brightly lit, though you cannot discern color, only shades of blue and purple.
Languages. You are competent in Celestial.

SVARTALFAR — FAERIE
Descended from the ancient Svartalfar fey of your dimly lit corner of the realm of Faerie…
Fool Us Once. Magic can’t put you to sleep, and you are competent in Curiosity checks against illusions and have resistance to psychic damage from charming effects.
Witching Whisper. As an action, you may whisper to a tiny object you have crafted, imbuing it with animation. It has a walking/climbing speed of 5 ft. If you can see it, it obeys your commands; otherwise, it moves randomly and closely follows anyone who touches it. It stays animate as long as it spends 8 continuous hours a day within 5 ft. of a living being.
Languages. You are competent in Sylvan.

ZIRILAR — PRIMEVAL IGNA
Descended from cursed fire giants, your people…
By the Light of the Furnace. You lose the darkvision trait.
Flameshaper. As an action, you can manipulate small flames (no larger than a foot in any dimension) in various ways:

BERLIMAR — PRIMEVAL TERRA
Deep within the tunnels and caverns of the…
Gemwise. You can spend one minute closely observing a gemstone that you’re holding and can view from multiple angles to determine its exact mundane market value (any magical effects it has may alter the value in ways you may not understand). If you cannot hold it or view it from multiple angles, but it is still within 5 feet of you, this determination has a 10% margin of error.
Petravision. This replaces the effects of your Darkvision trait. You can see light emanating from gemstones. Diamonds shine light as bright as a torch while other gems provide candle brightness.
Stoneshaper. As an action, you can manipulate unworked stone with your hands as though it were firm clay.
Languages. You are competent in Terran.

by: seanbyram
See All Pages

I'm sorry, but we no longer support this web browser. Please upgrade your browser or install Chrome or Firefox to enjoy the full functionality of this site.